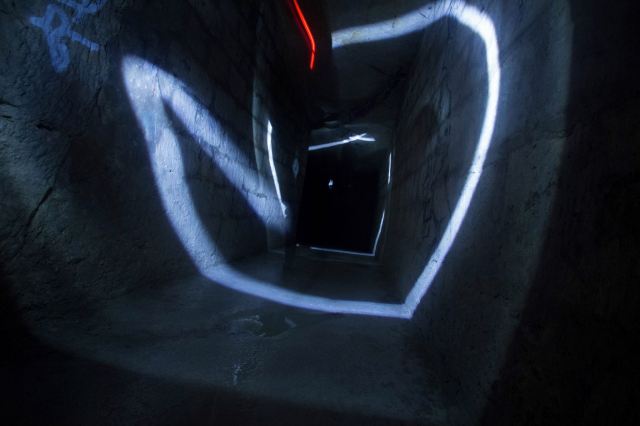 It’s just as well my new year’s resolutions don’t bar me from taking part in silly and slightly dangerous high jinks around Paris. My proper French hangover had hardly worn off after le réveillon de la Saint-Sylvestre when the first harebrained adventure of 2014 presented itself: a formerly dreadlocked acquaintance invited me to join his five vigorously dreadlocked friends on their nocturnal crawl through a forbidden section of the catacombs.

“D’accord!” I chirruped, without a moment’s pause to think about what such an expedition might entail. “Just a leisurely stroll around the Empire of the Dead,” I told myself, happy to forgo a long queue in the cold outside the carefully maintained public face of Paris’ sprawling underground ossuary. With construction commencing during the 1780s in disused quarries as a solution to the irksome sanitation problem of overcrowded cemeteries, the catacombs comprise a 321km labyrinth of caves and tunnels housing the remains of six million people — half the population of the City of Lights thriving directly above.

A ‘cataphile’ is not somebody with a loyalty card for the Café des Chats, but a passionné who frequently makes the journey between the worlds of the living and the dead. In doing so, they risk being caught by a police task force charged with patrolling underground (something I wasn’t aware of when I took the plunge, scout’s honour). Some devotees make amateur maps to distribute within an exclusive community, some dig their way into hidden sections; others organise secret film nights or even flame-throwers’ parties, turning these subterranean dungeons into their personal playground. Some respect the space; others don’t.

My cataphiles were of the respectful variety, leaving not so much as a cigarette butt or breadcrumb behind (yes, we ate down there), and insisting that they would never add their own tags to the long stretches of graffitied rock face crowded with leering skeletons and SpongeBob SquarePants. The team came well prepared, I noticed as I glanced at the photographer strapping on her thigh-high military combat boots, then looked down sheepishly at my own rainbow children’s sneakers and yoga pants. Oh well, allons-y, I guess. 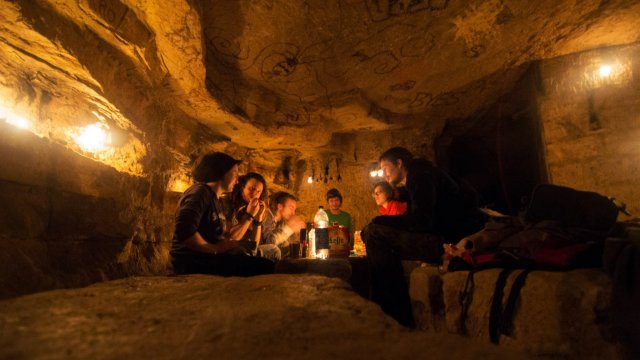 From our rendezvous at the 14th arrondissement Alésia métro — after nightfall, of course — we scrambled down to an abandoned railway and marched along the track until the group leader (who prefers not to be named) pointed to a rocky hole in the ground. My heart sank a little when it became apparent that I would be spending most of the evening wading down narrow passageways up to my knees in cold, cloudy-brown water, but we remained in high spirits despite grisly surroundings, greeting every other explorer we stumbled upon with the customary “Bonne année!” My non-dreadlocked companion fixed me with an intense look and pledged that he was responsible for my life, moments later splashing me with mud as he raced ahead. Even at under five feet, easily the shortest in the group, I often had to Quasimodofy as I stooped and squeezed my way through uninviting openings. 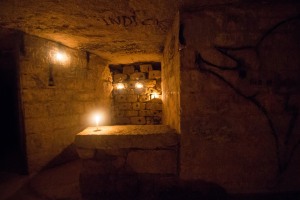 Long corridors led to chambers equipped with stone tables and benches. At each one we wiped our hands on dry patches of clothing and ripped into the supply of baguettes and beer (bon appétit), pointing headlamps under our chins to tell jokes and ghost stories — a strange yet comforting camaraderie. A visitor long before us had chiseled the outline of a skull into the wall and set tea lights in the eye sockets; thankfully not the most romantic candlelit dinner I’ve had in Paris.

An hour after our initial descent, already deep inside the belly of the beast, and we had yet to see any real human remains. Unlike the restored 2km segment of the catacombs accessible to the public, where bones line the passageways in patterned formations, most of the skulls here have been stolen, our ‘guide’ explained. I was just starting to feel disappointed when we were ushered through a crawlspace; suddenly I found myself on my hands and knees atop a sea of femurs. Tastelessly, a member of the group clacked two together like a heavy metal drummer; another picked up a brainpan and suggested it would make a good ashtray, before gingerly placing it back on its bed of bones. A few femurs had been brightly painted and stood upright, macabre totems. 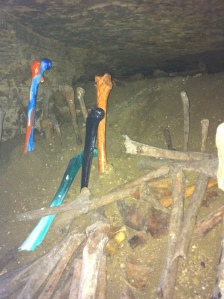 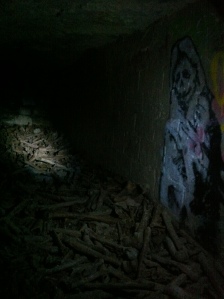 The mood and purpose of one space could differ vastly from the next. We went from a cavernous, film-themed graffiti room to what appeared to be an eerie shrine for a young girl who left us too soon; a flawlessly pretty teenager smiled up at us from a photograph placed next to a preserved rat floating inside a beaker. The entire randonnée took around five hours. But according to one cataphile within the group, people camp down here for days on end — some to get high, some to immerse themselves in silence, and some to commune with the dead.

I got nervous each time the guide, who has been exploring the catacombs since he was a teenager, stopped in his tracks to look at the map (the Paris street names directly above us are etched onto the walls) or herded us back the way we came after taking a wrong turn. We piped reggae and rap (what else?) through mobile phone speakers to keep energy levels high, facilitate a swift exit and avoid getting separated, at last clambering out just before midnight. On a whim, the group decided on a different route back to civilisation, jumped a stone parapet and narrowly missed the police who, we later discovered, had been stationed along our original path. It felt good to take in the crisp, cool air. And even better to take a bath.

Photos by Claire Narkissos. Un grand merci to the group that allowed me to infiltrate their field trip. 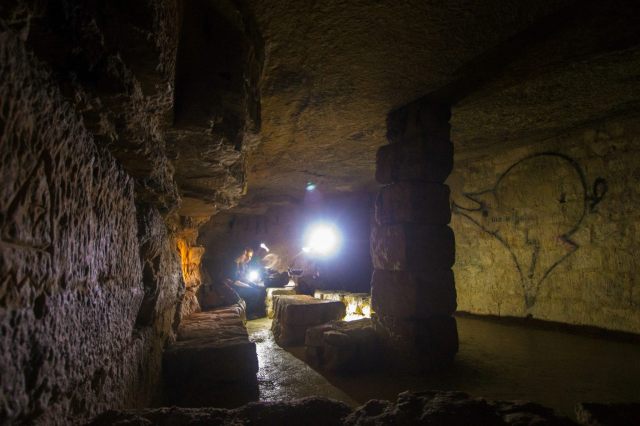