Last year, the Elysian Quartet took to the Birmingham skies in four helicopters to perform Stockhausen’s wildly improbable Helikopter-Streichquartett, in the staged premiere of his even more wildly improbable magnum opus Mittwoch aus Licht. (Thank goodness he decided to leave the defecating camels on terra firma.)

That performance was broadcast live to an audience at the Argyle Works, a disused chemical plant in Digbeth. Bravo Birmingham Opera Company. There’s just one problem with this scenario, though: it’s not very pretty. Depite its thriving arts scene, Birmingham has always seemed a bit blah as a city.

So on October 5, Paris borrowed the same English string quartet for a joyride over the Seine, transmitted onto a ‘giant’ screen (actually rather modest) on Pont Neuf and inside the palace of the Monnaie de Paris along Quai de Conti. Rich 18th-century interior aside, it seems appropriate to present a performance that costs so much to produce from within an institution dealing in coins.

Press were invited to view the event within these gilded walls but I preferred to be among the peasants for the brouhaha on the bridge. There, under the bleak grey sky’s occasional killjoy droplets, I nursed my thermos of tea (and fesses sore from sitting on those little bastard cobblestones), awaiting the big moment.

Each member of the quartet with pilot

Say what you like about the late, loopy Stockhausen’s interplanetary pretentions; his most infamous work drew an enormous and diverse crowd perhaps unprecedented in avant-garde classical land. There were old ladies with their hands pressed over their ears, children on scooters, balcony dwellers peering out from sous les toits, and even someone’s parakeet in the front row, released from his cage to get a better view. To my right a bald man in sweatpants played Plants vs Zombies on his phone while he waited; to my left a composer set up her tripod and prepared to measure volume levels: 88–100dB from our location close to the loudspeakers.

The collective excitement of this ‘happening’ was palpable — and powerful, since it’s hard to find a Parisian who isn’t blasé about the endless parade of cultural events on his doorstep. There was cheering when the screen first flickered to life. Cheering when the quartet had liftoff from the launch pad of a military base outside of Paris. (“Ave a good flight!’ the bumbling French compère told them; ‘Quel connard,’ griped the old chap behind me and my date.) Cheering when the French pilots were acknowledged alongside the musicians as co-performers. Cheering following the gros mots when scrambled images and dropouts caused by the plane flying overhead were resolved, though I personally enjoyed how this transformed the music into spontaneous minimal glitch. 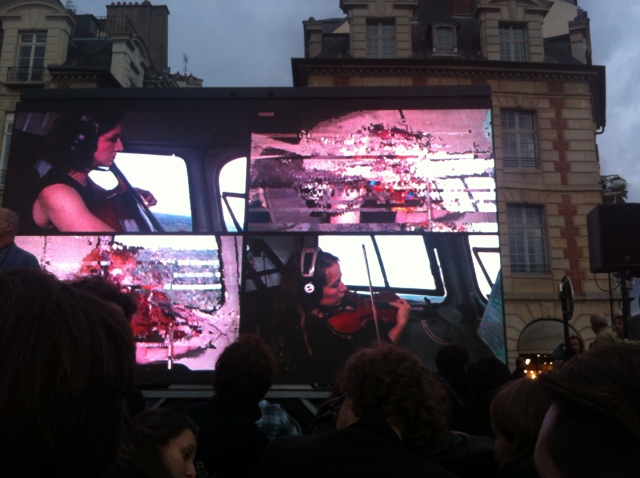 Cheering, above all, when the tiny specks appeared directly above us, one by one crossing the Seine. In my head I heard a flash of Ride of the Valkyries, but Stockhausen’s fierce tremolos won out as they beat against the rhythmic whir of chopper blades.

It was an historic event, the sixth performance in the world, celebrating the 50th anniversary of the Franco-German of the Élysée Treaty signed by Charles de Gaulle in 1963. But never mind all that; people really just wanted to see the hélicos. The crowd dispersed after 30 minutes — as soon as these instruments of war re-purposed as instruments of art had passed overhead — even though the musicians were still sawing away at the strings.

For me, the greatest moment was when cellist Laura Moody, in the top-left corner of the screen, stopped all that intense sawing and looked up from her music. A dazzling smile as she admired the view. Sorry Birmingham: ‘Sous le ciel de Paris s’envole une chanson…’

This was just the beginning of a very strange night. To be continued…