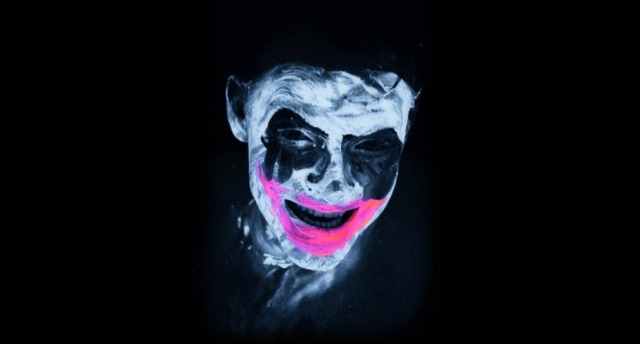 I was nervous about this one. An ensemble of twentysomethings staging Pierrot Lunaire sung in French by a man? Would the Sprechstimme sound like Serge Gainsbourg? And could a young troupe like Le Balcon, led by suspiciously hip 27-year-old Maxime Pascale and making their debut as resident ensemble of the Théâtre Athénée, really shed new light on this dark and twisted masterpiece?

The changes they made to language and voice type are apt: Pierrot is a sad creepy French clown after all, and the German texts Schoenberg chose for his 1912 atonal melodrama are translations from the original French poems by  Belgian symbolist Albert Giraud. The male transcription that replaced the usual shrill soprano recitations allows Pierrot himself to stand before us in all his grotesque glory. And so Damien Bigourdan donned the wig, daubed his face with a bit of Rorschach-inspired fluoro warpaint, squeezed the teats of his trannie vest and leered at his audience, all the while singing in a plangent, haunting high tenor.

As if that wasn’t disturbing enough, there were the spookhouse-gone-too-far projections of Colombian video artist Nieto for him to interact with, both on stage and on the large white orb hovering high over the musicians. As part of this nightmarish trompe l’oeil with its occasional black humour, Pierrot ripped open his torso to reveal beating heart, viscera and spleen (the symbolists did love their spleens); grumbled when his head was impaled on a cello spike; smoked a pipe made out of a live bird skeleton, and lurched into the orchestra pit to terrorise the quintet with a handycam, which he shoved into the conductor’s mouth, gleefully extracting a tooth.

La lune malade really was sick as they come, reflecting by turns an all-seeing eyeball, a nipple, flowing blood mingled with a dash of red wine, the ‘pallid drop of blood [that] stains the lips of a consumptive’… All writ large on a full moon to make you froth at the mouth. And I for one couldn’t look away.

The rich yet intimate interior of the rococo-meets-art-nouveau Athénée Théâtre Louis-Jouvet was the perfect fit for such a richly decadent vision. At interval from the comfort of my private box, while smokers crowded onto the ornate balcon, I frottaged every surface I could: red velvet railings, thick velvet curtains, velvet-upholstered doors, velvet ropes and velvet seats. Wisely, Le Balcon followed the eerie sensation overload of Pierrot Lunaire with Morton Feldman’s radiophonic Paroles et Musique (Words and Music) to sparse text by Samuel Beckett, with the musicians and voice actors (Bigourdan and Éric Houzelot) hidden behind a screen until the very last moment. Apart from a few major themes like paresse, amour, âge and visage, I missed a good chunk of the stammered French translation, eventually closing my eyes and resting my head on something soft (I think it might have been velvet?) as each austere, repeated musical gesture washed over me in surround sound.

One thought on “Du monde au Balcon: Pierrot Lunaire at the Théâtre Athénée”