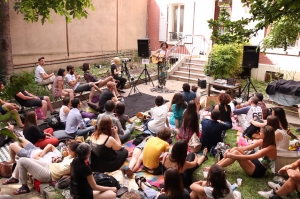 As Sofar Sounds state on their website, ‘We are passionate supporters of musicians and the magical nature of live performance.’ This international organisation hosts free concerts by emerging musicians in people’s living rooms around the world.

And where better to do it than in Paris?

Sign up for updates on these monthly gatherings, then RSVP for the gig you want to attend. If you’re accepted, you’ll be contacted with the address a day or two before.

I wince when I see that the latest postcode they’ve provided doesn’t begin with the 75 denoting Paris proper, meaning I’ll have to venture out into the Banlieue. But it doesn’t take long to locate the rambling terrace in Bagnolet – part enchanted garden with its vegetable patch, part Marrickville share house – taken over by casually dressed visitors stretched out sur l’herbe, soaking up the sun.

Usually Sofar Sounds is an indoor affair, but it’s summer in Paris, and Parisians love any excuse for a picnic. The afternoon’s line-up features six acts from France, England and the United States, all playing in the sun-dappled backyard chez Dimitri to an audience of around 50 mélomanes. Fairy lights have been draped along the picket fence; a garden of miniature gnomes is now a Heineken holding zone.

I find a patch of grass and, upon offering my Portuguese neighbours some 3-euro rosé, am promptly admitted into their circle. Squeezing along the garden path to load up a plate, I discover bearded French folk duo Kid With No Eyes (much less macabre than they sound) rehearsing unplugged out back and am introduced to the two Cléments that make up the group.

But it’s a gamine English songstress, Sophie Jamieson, who ascended the two concrete steps in flip-flops to sing in dulcet tones in front of the pink stucco façade. She plucks her guitar almost as quietly as she whispers shyly in halting schoolgirl French between songs, nearly drowned out by the kids playing basketball in the street outside our fenced secret garden.

Still,  the captive audience listens attentively and applauds her efforts warmly. The girl next to me munches chips in time to the music while her fella nods off in the grass. No one is bothered when Sophie makes a false start and has to begin again; when they are invited to click their fingers to the chorus, they join in heartily. After her set, she grabs a plate and joins us on the lawn to watch the next act. I’ve never seen Parisian concert audiences so well behaved and supportive, having come from the world of opera where they are quick to boo and whistle. (Do I even need to mention The Rite of Spring?) Perhaps it’s because we’re just outside the Paris postcode I know and love. Tant mieux.

Sign up for updates at www.sofarsounds.com – there’s also an Australian branch